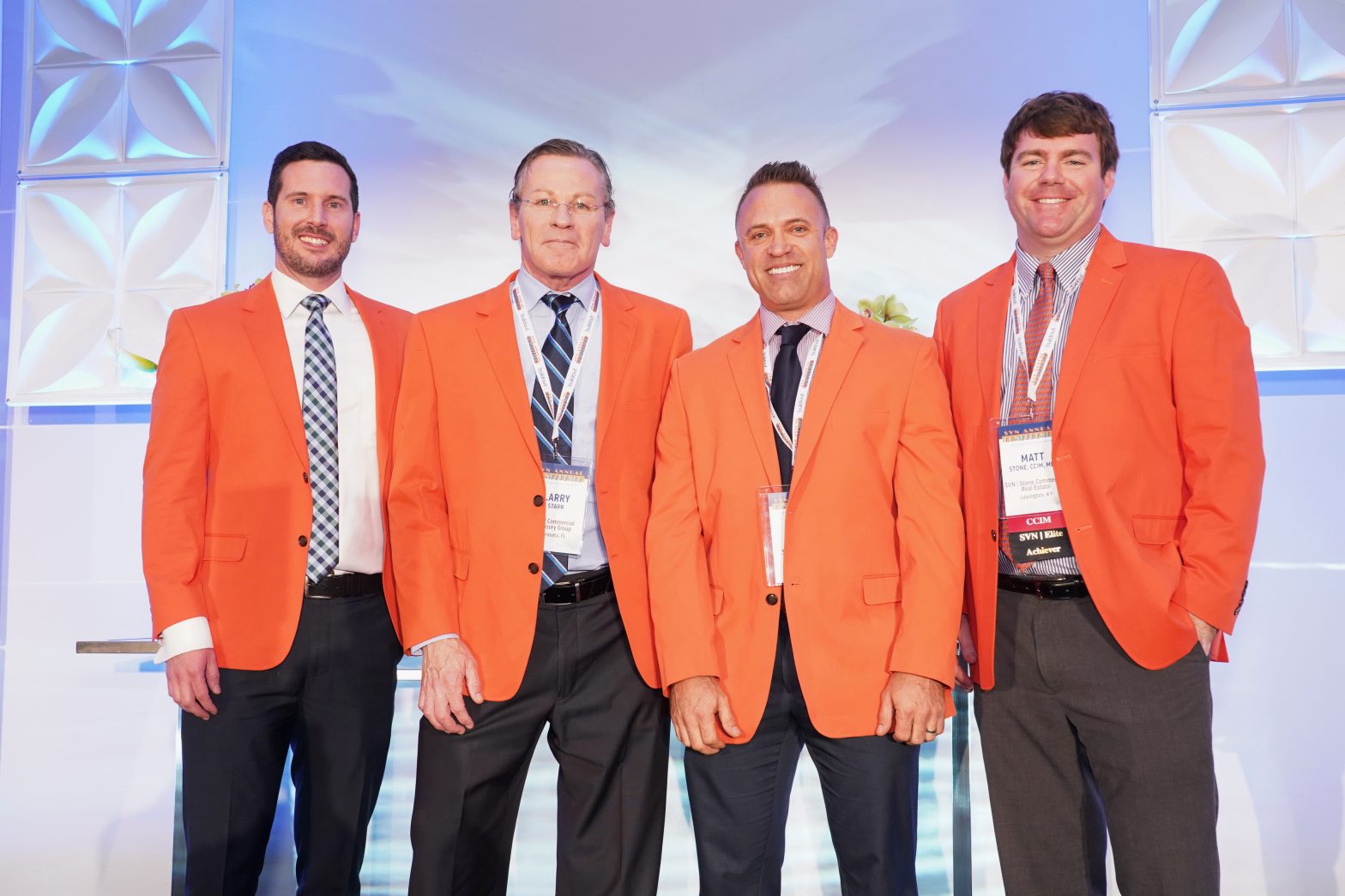 SVN announced the winners of its specialty awards, which recognize exemplary achievement in six different categories, and of the SVeN award.  The awards were bestowed during SVN’s 2019 Annual Conference, a yearly gathering of SVN Advisors and Managing Directors, which took place March 6-9 at the Eden Roc Resort in Miami Beach, Florida.

The SVeN award, in recognition of exceptional promotion and representation of the SVN Difference, was presented to Keith Kidwell, Managing Director of SVN Commercial Realty in Fort Lauderdale, Florida. 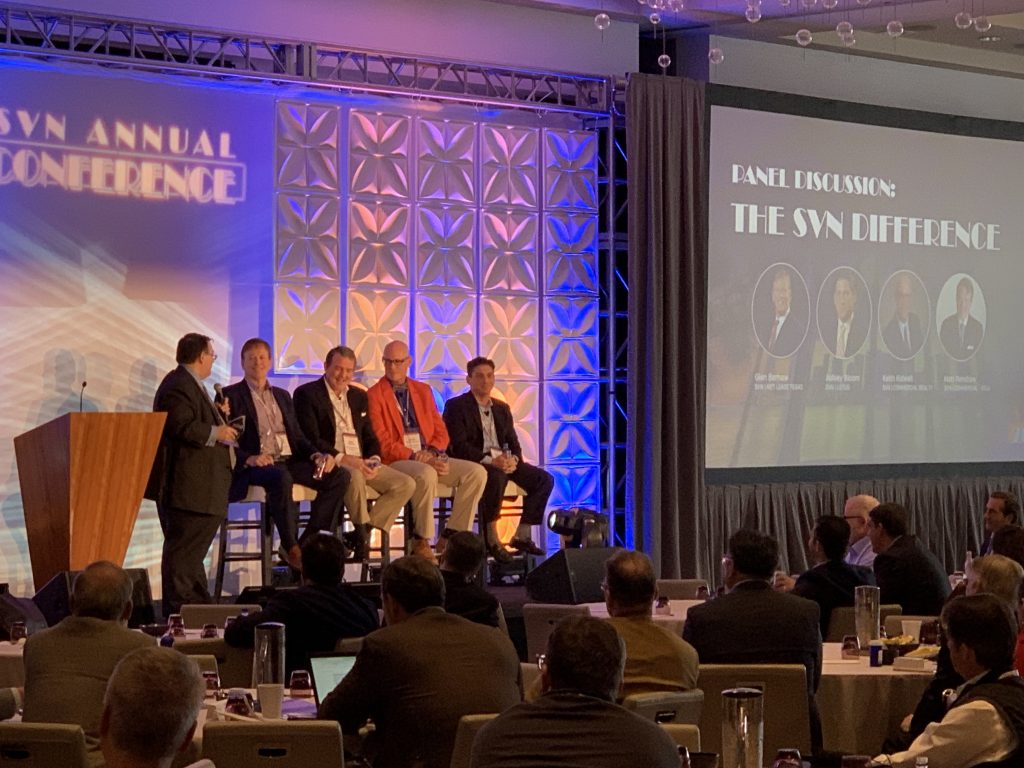 Each year, SVN recognizes winners in each of six categories: Rookie of the Year, Collaborator of the Year, Team Player of the Year, Humanitarian of the Year, Ambassador of the Year, and Managing Director of the Year. These specialty recognitions were presented by SVN COO Diane Danielson, and John McDermott, Executive Director at SVN Chicago Commercial, during the Awards Dinner of the 2019 Annual Conference. Recognized for their achievements in 2018 were the following:

Managing Directors of the Year: Matt Christian and Larry Starr, both of SVN | Commercial Advisory Group in Sarasota, FL.

“It is always a great honor to present SVN‘s specialty awards, which recognize the high standards, generosity, and extraordinary achievement of the honorees, in order to build strong relationships and the SVN brand,” said COO Diane Danielson.

Check out other news and pics from the 2019 SVN Annual Conference by looking up #SVN2019 on Twitter.

Firm of the Year is not the same as Top Producing Firm, although it can be. But when we look at nominees for Firm of the Year, we look for firms that are using the SVN tools, systems, resources and other offices to grow their presence. From the day SVN | Northco joined the SVN organization they went to our Jumpstart training events, used the SVN Live℠ Open Sales Calls to market properties, and embodied SVN’s collaborative culture. If you’ve ever called them for help on a golf or resort proposal, you’ve experienced it. They’re big, they’re productive, they cover many different parts of their market, and they’re a great bunch of men and women. And, this year, they are our Firm of the Year.

Led by Executive Directors Frank Jermusek and Walt Van Heest along with Managing Director Cameron Peterson, Northco became a member of the SVN organization in 2014. Headquartered in Minneapolis, MN, SVN Northco Real Estate Services is a full service commercial real estate firm that has been a leader in the Twin Cities market since 1975.

When it comes to treating an SVN franchise like a business, no one is more of an innovator than Al Stepan. He has led the organization in investing in bringing in outside specialists to support recruiting, which has allowed him to scale his teams. He was also a driving force behind the consolidation of our Denver and Fort Collins offices, positioning them to be a regional powerhouse. These are just a couple of the examples of thinking big and applying best business practices to the operation of an SVN franchise. And it’s an innovation that we can all learn from.

Al Stepan is a principal of SVN | Chicago Commercial and serves as a Managing Director along with Michael Thanasouras and Scott Maesel in Chicago, IL.

The SVN blog will be featuring one SVN Specialty Award winner every week for the next few weeks. Stay up to date with SVN and CRE industry news.

How does one make it to the SVN Partners Circle? Some make it because they have years of contacts built up or they have a couple of deals that have been in the works for years that finally come through. But there is another way: specialization, focus, and an unparalleled work ethic of making the calls and getting it done. Jamie Renzenbrink, who specializes with Gene Levental on Affordable Housing, did the work and landed one of the biggest deals in SVN history. Her prospecting was an integral part of the overall success of our #1 firm this year, so she is our Prospector of the Year. Jamie Renzenbrink is a Senior Advisor at SVN | Affordable | Levental Realty in Cincinnati, OH.

If there was ever an office that makes community building a priority in our Shared Value Network it’s SVN | Miller. Led by Brent and Amy Miller, the group’s hard work to better their Salisbury, MD community is why we are giving them this year’s SVN Humanitarian of the Year Award. The Millers take doing well by doing good to heart and it is something that is reflected through every member of their team. We could say more, but I think that their SVN Difference video says it all. The SVN | Miller team picked up another honor at the conference, as this video won the “Best Documentary” category of our first annual SVN video awards. Check out the video below.

Brent Miller, CCIM, CPM, serves as Managing Director and Senior Advisor for SVN | Miller Commercial Real Estate with offices in Salisbury, Annapolis, Bethesda, Maryland; and Rehoboth/Lewes, Seaford, and Wilmington, Delaware. Miller specializes in the sale, leasing, and management of retail, office, and industrial property. With more than 27 years of commercial real estate experience, Miller has closed more than 750 transactions, resulting in a career brokerage volume in excess of $250 million.

Tomi Jo Lynch grew her office the old-fashioned way. She went out and spoke to people with skills who needed help to grow their businesses. She brought them in and led them to SVN’s Broker Boot Camp (now known as SVN | Jumpstart), and she built an in-office schedule of training sessions and roleplays, taking advantage of the SVN System for Growth™. She executed and, because of that, she has built a much larger and more productive office. And it all started with training.

Tomi Jo is a Senior Advisor with SVN® | Gold Dust Commercial Associates, in Reno, NV, specializing in industrial properties with a focus on landlord representation. Her responsibilities are varied and include not only brokerage services but business development as well as overseeing and managing the brokerage team. Lynch serves on the NAIOP Board of Directors and assists the Programs committee with events and recruiting.

Tony Yousif serves as Senior Director of National Accounts for SVN | Asset Advisory Group specializing in the management and sale of investment properties.

What can we say about Alex Ruggieri? Not only does he dress the part of an impeccable Ambassador – he is out there online and in person representing SVN on his radio show, at CCIM conferences and with clients around the country. Recently he’s been working with David Wilk on some leading-edge corporate service projects as well. He’s been a Partners Circle winner for four years in a row – from 2012 through this year. This is his second time winning the prestigious Ambassador of the Year award, as he also received this honor in 2013.

Alex Ruggieri serves as a Senior Advisor for SVN | Ramshaw Real Estate, Inc., specializing in the sale of investment properties and corporate relocations in Champaign- Urbana and Central Illinois. With more than 30 years of commercial real estate industry experience, he has built an array of valuable business, real estate, and banking community contacts that benefit his clients. He has secured a transaction career sales volume in excess of $500 million.

Steve Kawulok, Managing Director of SVN | Denver Commercial has been with SVN since 2007 and under his direction, the Fort Collins office has been a top performing office for as long as we can remember. However, the fact that there were a number of nominations for Steve that came from around the country is a testament to his ability to be a true SVN Team Player. This year, Steve took it to another level when he was instrumental in building the SVN presence in Denver. To a quote one of the nominations that came in:

“His unique strong – yet soft-spoken – style made him the perfect candidate to blend the multiple Colorado offices and work together with the leaders from the Chicago SVN office to establish a regional presence in the Denver metro area. He is a real team player.”

The SVN blog will be featuring one SVN Specialty Award winner every week for the next few weeks. Stay up to date with SVN and CRE industry news.