SVNIC’s 2016 Market Outlook Reports assess the current state of the national commercial real estate market, and identify micro-trends within specific geographic regions and industries for 2016. Today we are delving into the 2016 Top Office Markets to Watch. Not the largest or the most actively contested markets, the 2016 Office Markets to Watch are each at an important juncture that presents unique opportunities for investment. Together, they reflect the diversity of trends that is driving the economy and commercial real estate performance in markets across the country.

Houston is the hub of oil and energy production in the United States and, as such, is uniquely susceptible to the recent oil price declines that appear to have near-term persistence. It is likely that the office market in Houston will experience some pain in 2016 and beyond on a relative basis. Declines are already being felt in key office sectors with Information and Professional and Business Services declining at -2.5% and -1.8% annualized rates, respectively; however, Financial Activities is growing at 2.0% and thus should balance some of the negative effects. Overall, the Houston economy is actually fairly healthy with a 4.8% unemployment rate as of January ‘16 which has stayed near constant for much of 2015; thus, fears of the oil price declines may be overblown.

SVN’s Houston-based Advisors at SVN | HINT Advisors have some office market highlights to share. Here’s what to look out for in the Houston office market in 2016:

Over the next few weeks, the SVN Blog will be featuring posts that will focus on each of the top markets to watch for industrial, multifamily, office, and retail properties. SVN Advisors from selected top markets have provided their industry expertise regarding what to look out for in their specific market in the coming months. Don’t miss out on these important insights – subscribe to the SVN Blog on the right side of the blog homepage.

To read more on other top office markets, download the full version of the 2016 Office Market Outlook report here.

Sperry Van Ness International Corporation’s (SVNIC) 2015 Market Update Reports assess the current state of the national commercial real estate market, and identify micro-trends within specific geographic regions and industries for 2015. Today we are delving into the 2015 Top Multifamily Markets to Watch. Not the largest or the most actively contested markets, the 2015 Multifamily Markets to Watch are each at an important juncture that presents unique opportunities for investment. Together, they reflect the diversity of trends that is driving the economy and commercial real estate performance in markets across the country.

The nation’s energy capital has been rattled over the last year by lower energy prices, though experts disagree on how significant the impact will be on Houston’s increasingly well- diversified economy. Some companies in the oil exploration, production, and drilling businesses will undoubtedly make cuts in 2015. There is no avoiding that five of Houston’s top ten employers are in the oil industry.

While demand may soften, Houston’s most daunting challenge is its pipeline of new apartments. Nearly 30,000 multifamily units were under construction as of the first quarter of 2015, with completions projected to exceed 15,000 units by year’s end. Chandan Economics projects that Houston’s ratio of new jobs to units delivered will slide to below 4.5% in 2015, less than half the national average.

While higher-end construction projects clustered in Houston’s downtown neighborhoods could falter, the suburban multifamily market has a relatively thinner development pipeline and may be better positioned for further rent gains in 2015. Vacancy has evaporated in the mid-tier of the market as many Class B properties have found their way out of the inventory, sometimes through strategic repositioning. Cap rates on these assets are relatively high, affording opportunities for income-oriented investors betting on Houston’s long-run growth record.

To read more on Houston and other top multifamily markets, download the full version of the 2015 Multifamily Market Update report here. 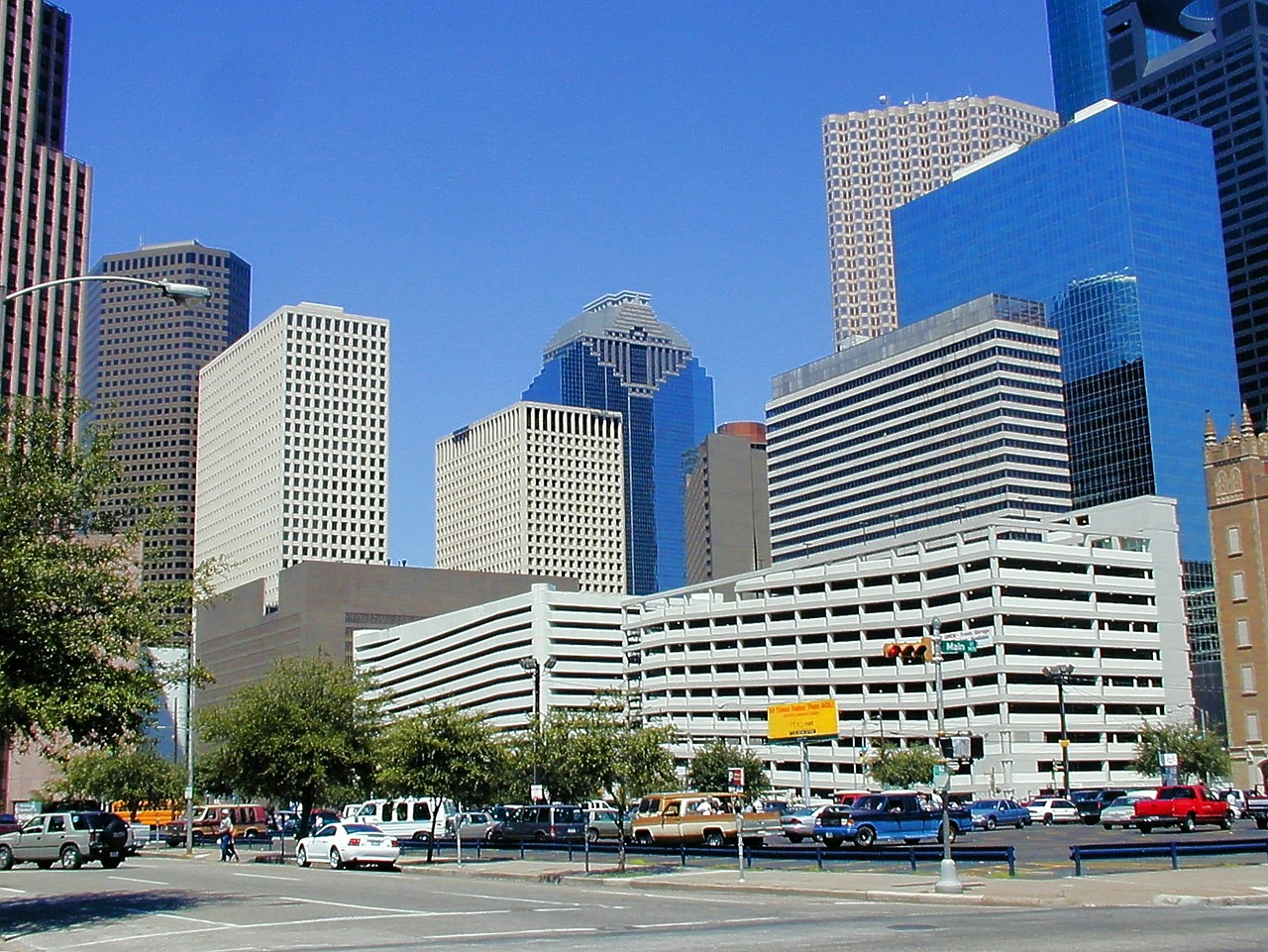 Sperry Van Ness International Corporation’s (SVNIC) 2014 Top Markets to Watch Reports assess the current state of the national commercial real estate market, and identify micro-trends within specific geographic regions and industries for 2014. Today we are delving into the 2014 Top Apartment Markets to Watch. Not the largest, or the most actively contested markets, the 2014 Apartment Markets to Watch are each at an important juncture that presents unique opportunities for investment. Together, they reflect the diversity of trends that is driving the economy and commercial real estate performance in markets across the country. 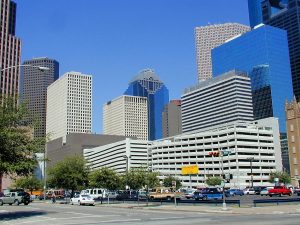 Houston’s multifamily market has been on a two-year high—and lenders are ready to take it down a notch. Construction will add nearly 11,000 units in the Energy City by the end of 2014, more than 6,000 of which will be in a handful of high-end urban submarkets, growing inventory in those neighborhoods by more than 6 percent. With the remaining 5,000 or so units to be completed elsewhere in the city, however, the overall vacancy rate of about 6 percent is unlikely to shift appreciably until 2015 or beyond, and remains low for this market. Houston’s appetite for apartments is growing nearly twice as fast as the pace of construction, which is expected to add 10,000 units annually in 2015 and 2016. Nevertheless, some lenders concerned over the recent volume of development in Houston have tightened underwriting for construction loans, which could create a competitive advantage for investors with other sources of capital.

To read more on Houston, and other top multifamily markets, download the full version of the Top Apartment Markets to Watch report below.

Download the Top Trends and Markets to Watch Reports 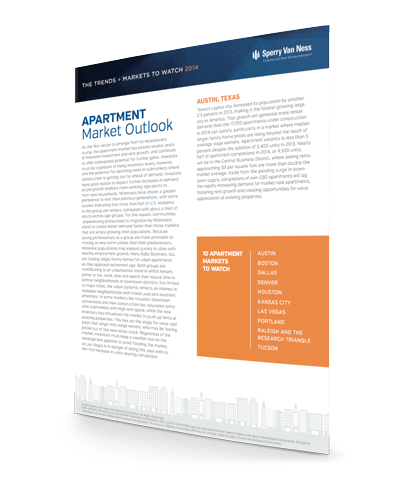 This week, we turn the spotlight on SVN/HINT Advisors with offices in Houston, Texas.

1. What has been your strategy for growing your firm and also your market share?
I focus on retail investments, retail stand-alone (NNN) and retail land. I have a focus in my practice where I go after markets first, then retail opportunities within.  One of my best Advisors continues to emphasize the importance of discipline, and I have a daily discipline that extends to a weekly and monthly schedule, divided in blocks of time and activities. It is driven by a set goal but it comes down to execution. My weekly schedule includes daily follow-up calls, business development calls, and conference calls with clients or colleagues morning to noon, followed by emails and computer related tasks after lunch.  Next, I do calls to West coast and Central time leads since I cover California and Houston, then I depart to business engagements in the evening or otherwise do research and plan an agenda for the next day. Just before going to bed I check emails for any last minute updates. Throughout the day I also read trade journals and news on relevant retail and check my social networks.

2. What are some of the unique activities you do to motivate your team?
I believe in clarity and definition when it comes to relationships. Therefore I make an effort to communicate the goals upfront, to share the vision, and to share the expectations from each other. I use technology to send reminders, reconfirm agreements, and multitask as efficiently as possible.

3. What’s been the biggest challenge in running your business in the last few years?
Since starting my practice, the biggest challenge has been high productivity per hour.  Sometimes I have been guilty of getting distracted by events around me, but I am learning to minimize my distractions as much as possible when I am to be focused on work.

4. How many Advisors/Staff did you have when you joined SVN? How many (in total) do you have now?
Right now just one, but I have a network of peers and three strong Board Advisory Members who assist me when I need something.

More Expansion in All Sectors

The Houston, Texas apartment market is the fourth largest in the country with nearly 600,000 units. Looking at the real estate drivers, it’s easy see why there’s so much demand. More than 90,000 jobs were added in 2012. New construction of offices in the energy corridor, a new Exxon campus in Harris County, and new apartment construction throughout the Houston area has created a large employment demand that’s expected to be strong for at least the next two years. The Houston Consolidated Metropolitan Statistical Area (CMSA) has gained about 90,000 jobs per year since 2011 which creates a demand for 18,000 new apartment units per year.

Our fourth characteristic in defining the expansion cycle is a market that shows moderate to high employment growth. As you can see from the Employment Growth chart, Houston has seen a large increase in employment growth in the last three years with last year increasing to 90,000 net new jobs after a negative 102.8 thousand lost in 2009. Basically, we have recovered the 2009 losses in the last three years. Jobs are projected to increase in 2013 to about 91,000. Historically Houston absorbs 1 new unit for every 5 new jobs.
About 16,000 units are expected to be absorbed in 2013. In 2012 there were 198 garden apartment sales in the Houston CMSA – up 13% from 2011. Projections for 2013 are 250 properties based on Houston’s peak years.

As seen from the Rental Rate chart, in the last two years rental rates in the Houston area have increased about 9.4% or 4.7% per year.
Rental rates are expected to rise in 2013 for Class A & B apartments 4.7% above that of the 2012 levels. Rent concessions are almost non-existent except in the low end Class C & D properties.

Is it Time to Buy or Sell?

The best time to buy in Houston was the fourth quarter of 2010 to the 4th quarter of 2012 if you had money to rehab and could wait for the upside.  Well the upside is here and expected to continue in the Houston CMSA through 2017 based on job growth and a 3-year lull in new construction.  It is definitely a seller’s market and good properties are hard to find.  If you are looking for an increasing income in a dynamic market, it is time to buy or build.  As an owner it is time to think about selling in the next 12 months.